Demonic Acupuncture And The 13 Ghost Points 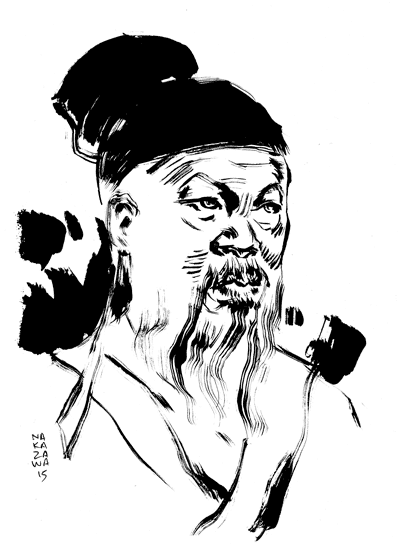 Due to their obscure nature, occult history and the vast lore surrounding them the 13 Ghost Points of Sun Simiao can be one of the more intriguing treatment protocols found in the body of Traditional East Asian Medicine. These points may have been of Shamanic origin rooted in the practice of demonology and exorcism. Although still taught in in modern day schools of Acupuncture the correct use and protocol for these points is most often not taught to present day students. Additionally because of their obscure nature the 13 Ghost Points of Sun Simiao may also be incorrectly be associated with the practice of Dim Mak. (Sun Simiao Illustration by Kiyoshi Nakazawa)

This peculiar grouping of acupuncture points first appeared as “The Song of the 13 Ghost Points” written in the book “The Thousand Gold Prescriptions” (Essential Formulas for Emergencies [Worth] a Thousand Pieces of Gold) by Sun Simiao. This book, a fascinating study in itself, is considered a medical masterpiece and is believed to be a compilation of all the pre-tang dynasty medical texts. Within the book there are 5,300 recipes for medicines and 932 entries on acupuncture.[1] The Thousand Gold Prescriptions also discusses Life Saving Remedies, Gynecology, Pediatrics, Mental Disorders, Pathology Mechanisms and Treatment Strategies. It is one of the earliest textbooks to discuss ethics in medicine and a moral code that should be followed by physicians.[2] Modern research has found during Sun Simiao’s life around 618 A.D. the population in his area had decreased rapidly due to epidemic disease which may have also influenced how he organized the contents of this book.[3]

Sun Simaio lived from 581-618 A.D. dying at 101 years old he was afterwards honored as “The King of Herbal Medicine.” It is reported that by the age of 20 he had mastered and memorized all the medical classics. Practiced emergency medicine with the military troops of Li Yuan who later became emperor and found great favor with him. When Sun Simaio died it was reported that his body did not decay for more than a month. It is speculated that he had been taking mercury and arsenic elixirs a practice described in his last book to preserve his body at death.[4]

The 13 Ghost Points are believed by acupuncture physicians of today to treat Mental Disorders or “Dian Cong.” The treatment of Mental Disorders with acupuncture are described as far back as the Yellow Emperor’s Classic of Chinese Medicine a medical textbook composed over 2 thousand years ago (475-221 BC). Many scholars believe Epilepsy, Schizophrenia, Mania and other mental illnesses were originally considered to be caused by demonic possession.[5] Research by Poney Chiang states; “By late Zhou Century (771 B.C.) illness causing spirits were no longer associated with ancestors but with those with demonic origins.” During this period shamanic healers practiced only spiritual healing in the form of exorcism. It is thought that by at least the fourth century, Daoists expanded their clinical speciality beyond demonology.[6]

In modern day acupuncture textbooks and universities the 13 Ghost points are most commonly taught as a grouping of points used to treat mental disorders such as Mania, Epilepsy, Schizophrenia and so forth. The use of the points is based predominantly on a point function paradigm. Meaning the function of the point is taken into consideration in relationship to the patients diagnosis and then the point is used if deemed appropriated. For example P-7 has the traditional point function of clearing heat from the pericardium and calming the mind. Therefore if a patient comes into the clinic that’s restless or manic and after examination the doctor reaches a diagnosis of too much heat in the chest this point could be selected as part of the treatment because of it’s individual point function and it’s classical grouping as one of the 13 Ghost Points. While this idea may seem logical it is not how these points are used in the actual Song of the Thirteen Ghost Points!

The Song of the Thirteen Ghost points is a very ordered treatment protocol. Each point in the Song is needled in an order using a specific type of needling technique. The Song begins with instructions that it is usually not necessary to needle all 13 points and often a cure has been achieved after needling the first 2 points in the prescription.[7] Should the patient not be cured after the first two needles the doctor should continue to proceed needling through the protocol. The treatment should be stopped as soon as the patient is better even if all 13 points have not yet been needled. The song states that you will know if the treatment is working by the time you have needled 6 points. In modern schools of acupuncture students are most often not taught to needle the 13 Ghost Points in their prescribed order.

Many of the needling techniques used in the Song of the Thirteen Ghost Points are very painful. For example the first point in the prescription is Du 26 or Ghost Palace a point located just below the nose above the upper lip. (At the junction of the upper and middle third of the philtrum) The Song gives instructions to insert the needle until it can’t go any deeper. This would indicate needling all the way through and into the patient’s upper gum. The 6th insertion calls for a “fire needle” here it is debated among scholars whether an actual red hot needle should be inserted into the patient or if the term “fire needle” is merely referencing the needling technique of using 3 insertions and manipulating the needle 7 times during this step of the treatment protocol.[8] By the time the 11th point is reached the doctor is instructed to burn moxa (artemisia vulgaris) on a point titled Ghost Treasure located on the crease between the gentials and the anus. The final point in the prescription is an extraordinary point named Ju Quan or Ghost Seal this point is located in the center of the tongue and is most often very painful to have needled. These are just a few examples of the acupuncture techniques rarely used today but called for in the Song of the Thirteen Ghost Points.

Have the Thirteen Ghost points ever been tested under the conditions of modern research? The author of this article is not aware of any modern scientific research in the English language studying the Thirteen Ghost Point and or their specific treatment protocol. Opinions among both doctors of Acupuncture and Scholars contrast greatly concerning the effectiveness of this treatment protocol. Some scholars will argue against the Song of the Thirteen Ghost Points considering it to be an historical relic more than a proven clinical method[9]. Others will argue due to the Chinese Communist Party’s ideology of separating medicine from superstition that this Ghost Point prescription would have been among the first to be criticized and would not have survived to this day if it didn’t prove to be effective clinically in the treatment of mental illness.[10] Even more interesting are the numerous modern day reports of patients seeing spirits, receiving enlightenment or a having a metaphysical experience as a result of receiving this treatment protocol in it’s entirety.[11]

[5] Zhang, Yu Huan, and Ken Rose. Who Can Ride the Dragon?: An Exploration of the Cultural Roots of Traditional Chinese Medicine