An Analysis of Action Comics Issue One Page Two 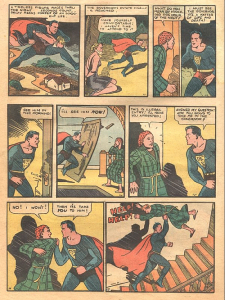 Superman made his first appearance in Action Comics issue one. Although he is commonly interpreted as simply a product influenced by the great depression, originating as a champion of justice and social equality you will be surprised to learn this character did not begin as the clean cut, law abiding hero most people interpret him as. Superman started as a dark character, one that was above the law, one that would take any matters necessary into his own hands in order to accomplish his objective. A careful examination of the second page found in Action Comic Issue one will in fact reveal Superman’s true origins of sex and violence. As we continue to examine this page you will quickly learn the overall message underlying this character: no obstacle, no barrier, and no person can stop Superman. Superman is in fact power.

Throughout the second page of Action Comics issue one[1] Superman is rendered in shadow. This rendering casts his clothing in darkness creating a much more foreboding darker character than the brightly colored Superman we are use to in the modern day. Superman wears his underwear over his tights, a common practice of the strongmen performers in the 1930s[2], which informs the reader of the time, that they are dealing with a character of great strength.

In the first panel, we see our hero leaping through the night, holding a woman in bondage as if she were a sack of groceries. The woman is left near a tree, still tied up, her skirt is tight and pulled up high, well above her knees. How she is seated, the position of her body, her undraped back, the outline of her breast all exudes sexuality. She is told to “make herself comfortable,” obviously she is not needed and will simply be in the way to whatever it is Superman is going to do. Superman’s comment also alludes to the idea that he will be back later to retrieve her. These first two panels not only establish that Superman is on a mission, but also that he has conquered women. He will take them as he pleases and they will wait for him. 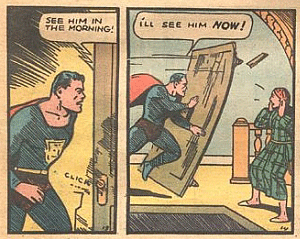 As the page progresses, Superman is next confronted with the physical barrier of a door. The door is easily destroyed with violence and this violence is well illustrated. Not only is the door broken, but we can see a piece of it flying through the air. We learn from this that Superman has the capability to destroy anything that gets in his way. 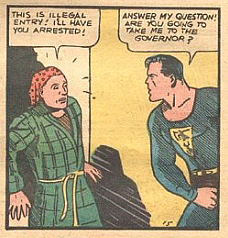 Next, Superman is confronted with the Law. The owner of the home Superman has now entered says, “this is illegal I’ll have you arrested”. Superman’s reply is a cool, “Answer my question are you going to take me to the Governor?” This dialog informs us further that Superman has no regard for the law. The legality of his actions are of no concern to him.

Finally, Superman is confronted by man. The man inside the house now refuses to take Superman to the Governor, and the page ends with Superman carrying him off with one hand up a staircase. Man is helpless in contrast to Superman, “help, help” is written in large letters as this man is carried away. This final panel is a display of Superman’s strength. His ascension up a staircase symbolizes how Superman will ascend and rise above all who stand in front of him. 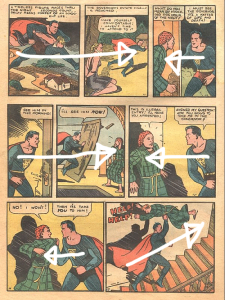 The last point I want to make concerns the composition of this page and how the scene will rotate 180 degrees each time Superman is confronted with a challenge. Notice in panels 1 and 2, Superman is easily moving across the page from (our) left to right, the natural direction our eye wants to move as we read the page. By panel 3, when Superman is confronted with his first obstacle, the door, Superman is on (our) right hand side. This 180 degree flip stops our eye from traveling smoothly in the direction it is accustomed to as the reader. Like Superman, we are also interrupted. As Superman breaks through the door he is again traveling left to right. Then, in the final panel when confronted by the man, Superman is again on the right hand side of the scene. Finally, the page ends with Superman in the last panel moving past his final obstacle traveling from (our) left to right once again.

In summary, the origins of Superman is in strongly rooted in sex and violence. The message is clear, Superman will do as he pleases. No woman, man, physical object or law can stop him.